I wanted to let you all know that I am sending out prayers for you all as I always do, but especially in these crazy times. Please be safe and stay healthy.

Always with LOTS of Light and Love.

Thinking of you all my Angels!

Three back to Back workouts today. A TacFit class and two Bootcamp classes. I do love to workout!!!

Happy weekend my Angels!!! Have fun, stay safe, and drink lots of water in the heat no matter where you are.

Courage
Today we are reminded to stay strong and be a loving warrior of light. Archangel Ariel is by your side helping you to act upon your convictions as we stand up for our beliefs, we’re a role model for others. Have the courage to be yourself today – don’t let others dim your light!
“In this situation you need to act upon your convictions, even if others disagree. I’m protecting you from harm, and guiding you to be a loving warrior of light. As you stand up for your beliefs, you’re a role model for others. This is an important form of spiritual teaching, in which your example give others courage to also stand up for their own principles.
Ariel otherwise known as the Lion of God, counsels your fears and helps build the qualities of bravery, courage and focus with elegance. She will help boost your confidence and being involved with divine magic and miracles, help with manifestations, for she is the Master Manifestor. She aids teachers, healers and service workers, protects the environment and heals animals. She is indeed, the Patron Angel of Animals.

Always with Light & Love My Angels!

I’LL GIVE YOU COURAGE!

Do you need courage?  Well, if you think you do, come on over and see me because I will make sure that you get it and give you some of mine!  Heck, I will even be there for you and help you out so ~  there will be two people with courage to help you in whatever situation you might encounter!  YOU GOT THIS!!

Always my Angels with LIFE, LIGHT, POSITIVITY, STRENGTH, BEING THE WARRIOR WITHIN, GUIDANCE, and LOVE!

THE ENLIGHTENMENT OF CANCER ~ PART II ~

After I talked to Rob I then proceeded to Eric’s office where I sat down in one of the
chairs in front of his desk and just looked at him. He looked at me and asked me what was wrong
and I then proceeded to tell him about my call just now from Dr. Boardman. Eric is a cancer
survivor as well, a melanoma cancer survivor so he understood exactly what I was feeling and
going through. He went on to say that I will beat this without hesitation. I remember him saying
that the treatment today is not like what they had 20 years ago and he knew I would be ok. I
remember him saying this, but at the same time I was still in shock.  He is a great friend and boss.

Later that evening and after Rob and I had discussed this in length, I decided it was time
to tell my family. I remember that I waited until I had my shower and was cleaned up, grabbed my
cell phone as I knew this was going to be a long night and proceeded to call each member of my
family – starting with my mom, my dad, my brother Randy and then my brother Jay. I remember
telling Randy that I wanted to be the one to tell my nieces in person and I would do so soon. I could not be the one to tell my nephews in person like I wanted to because they lived in Connecticut at the time. The calls were trying at first, but through each one I was very optimistic and had my faith that everything would be alright and advised my family of this each time I talked to them. That following weekend I went over to Randy’s across town where I pulled the girls aside by myself to have a talk. The girls and I always talk like this about many things so this was not going to be any different, just about a different topic. I love those girls like they were my own, so to see their eyes and feel their heart when I told them was heart wrenching, but I was very positive about it and told them that it would all be ok. I just knew it would be. I reminded them that our family were fighters and that is exactly what I intend to do.

On a warm sunny day in August, Rob & I went to the office of Dr. Boardman to discuss his findings. As we were waiting in the waiting room, I could see these books around a table on Breast Cancer and thinking to myself “really, am I really going to have to be picking up one of those books to see where my life is about to be headed?” When just at that moment we were called back to meet with Dr. Boardman. As we went into one of the examination rooms, Rob sat in the corner with a note pad and pen and I sat up on the table. He was going to be the one to take notes, ask questions and remember what the doctor said because I knew I was not going to be in any shape to remember exactly what he was saying. When Dr. Boardman came into the room and we began discussing my having Invasive Ductal Carcinoma “Cancer” and it is triple negative, I could not help but start crying and thinking “is this real?” as well as “is this really happening to me?” I felt just fine. I did not feel sick – I felt normal, healthy. I never once said “why me” just “is this real”. Dr. Boardman continued to give me my options and as I listened intensely at the words that were coming out of his mouth, my first thought was take them both, take them both because I do not want them. I advised Dr. Boardman that I wanted a Double Mastectomy and that was that. I only wanted to go through this one time. My reasons have specifically been that I only wanted to go through this pain one time and one time only, I did not need breasts (they only get in the way anyway) and if I had Cancer in one breast whose to say I won’t get it in the other down the road. The sooner the better I say. By the end of our appointment Dr. Boardman had scheduled my surgery for October 2nd at 1:30 and recommended an Oncologist that he thought we should meet right away and whom he thought would fight this cancer as aggressively as he was and that was going to be the only way to fight this, aggressively. 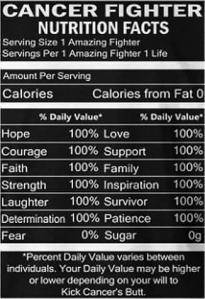 Always know that you have a friend who is there and will listen.  And when in doubt, sit in peace, sit in nature, listen to the surrounding chirps and noises in nature, listen with your heart and you will know that there is Love and Light in peace.  Your Angels are always near.

Tell me what you see!  I see Archangel Michael and his Sword, the Sword of Strength ~ There is something about a sword and this sword in particular that gives one inner strength to face the world and your inner self for positivity (should you need to) in order to ward off any and all offenders whether physically or mentally.  Should you need a little help or encouragement, this should do it.  Take a look and tell me what feelings you get from it:

Archangel Michael – No matter the situation, no matter the challenge, Michael stands ready with his sword and host of Angels to protect and serve all who call upon him for assistance. He clears the path of obstacles, he gives us strength and courage to carry on during the dark times in our lives. He fills us with hope, inspiration, and faith that the Universe is always on our side. Michael protects against negative or psychic attack and astral debris that can cling to our energy fields.

Don’t you just love this and the positivity and strength it provides!

Always with Light, Love, Strength and “your” Warrior Within!

No matter what religion you are or what you believe in, we all need a little prayer.  So, say this with me… 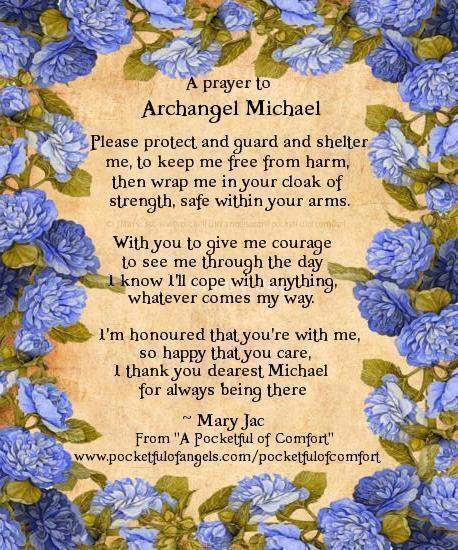 May your light shine bright today and always through a little Faith, Love, Belief, Positivity and your Warrior Within!  Always with Angelic Love to You!  Enlightenment Angels

Let Go Angels
Have you ever been found when you felt you were so lost that the light was incomprehensible? Keep the faith Angels - you are never alone! YANA - just like @theroadpoems shares with us … Everything Found was Lost - always with Light & Love! ❤️ @briandavidcinadr
Change your Mindset…