What a documentary and a must watch. What an amazing soul, Marc Andre LeClerc.

You can watch this on Netflix, Apple TV, Amazon Prime or at a theatre. 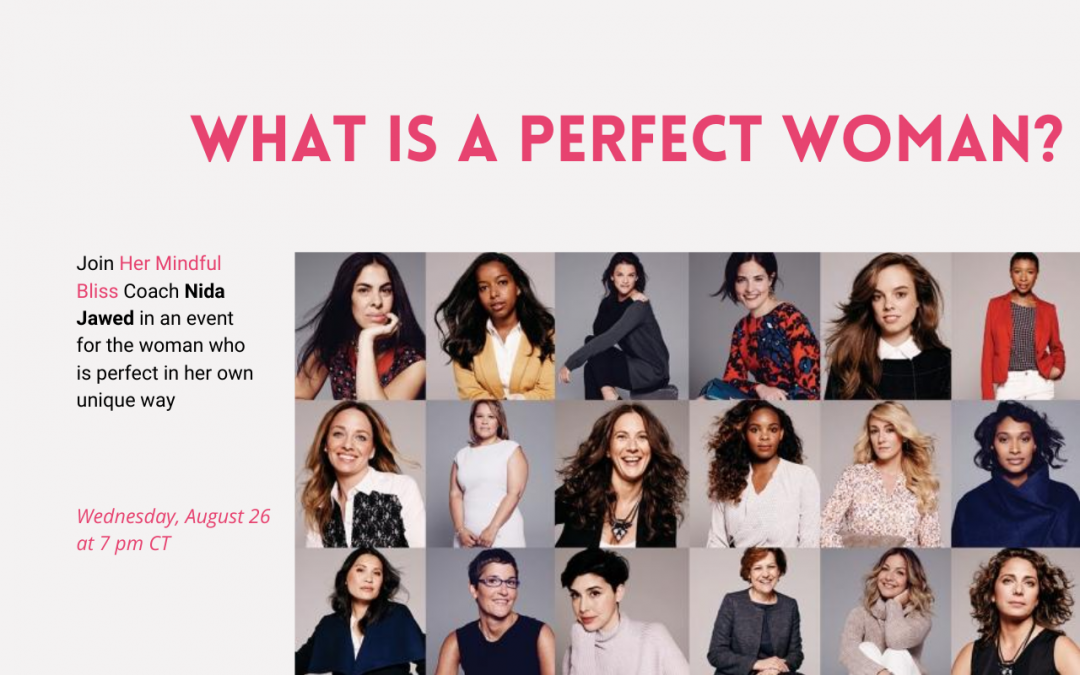 What is a Perfect Woman?

What’s next you sit and wonder as this crazy life of ours goes by.  Well, ladies why don’t we all go over and check out their blog and web site…

About Her Nexx Chapter

We as women are about the quality of life through wellness, lifestyle, and empowerment. Her Nexx Chapter is a 501(c)3 non-profit organization. We build and connect the missing bridge for her inner balance, peace, and self-assurance. To help women stimulate self-growth with ways to connect, mentor, and nurture her lifestyle. Our humanitarian contributions to women, for women indicates our commitment to the true concept of “The Future of Connection for Women.”

How to Transition from a Job to Your Mission, Passion and Purpose

Thank you to AskAngels for the amazing Angel Card Reading. 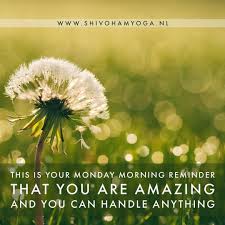 Today is a gift and a beautiful day!  So, go out and enjoy it to the fullest.

Cheers Angels and may you ALL have a Blessed day and week.

Much Light and Love to YOU ALL!

I wanted to take this time to wish you all a very Happy Holiday Season and a very Happy New Year.  The upcoming year is going to be a good one and this puts 2018 to rest.  The year of 2018 has been a bit challenging for most, but we must all stay Positive, always keep the Faith and know the next year will be a good one. 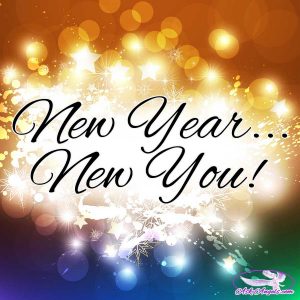 My Angels, please remember to always reach out and talk to your Angels.  Talk to them because they are with you and always near you.  They are there to listen and assist.  You just have to give them a chance and have Faith.

We ALWAYS have Angelic Guidance – Always. 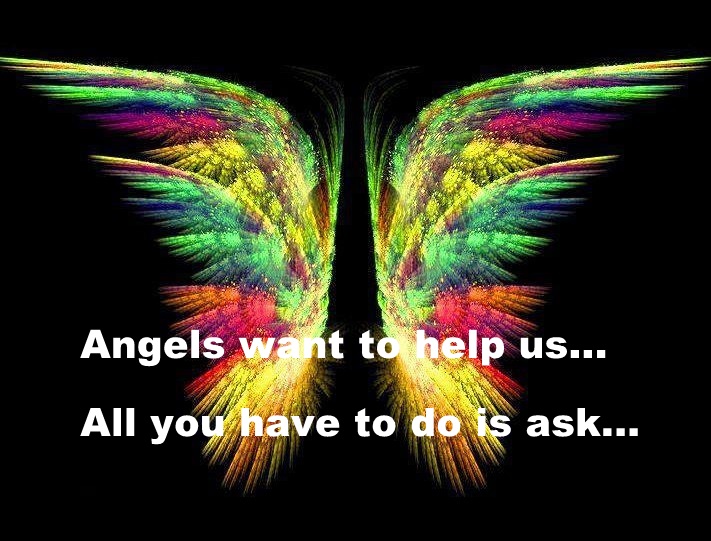 Sending you ALL lots of Light and Love!

Happy Holidays and a VERY Happy New Year my dear and Angelic Angels.

The past decade has been the warmest on record. 2016 was the  hottest year ever recorded and 2017 is already on track top it. Meanwhile, the northern hemisphere has already lost a million square miles of spring snowpack since 1970—an area three times the size of Texas.  Snow levels are rising in elevation and winters are shorter. Climate change is already  affecting winter.

By 2007, pro snowboarder Jeremy Jones found that more and more resorts he’d always counted on for good riding were closed due to lack of snow. Something was clearly going on, and he felt the need to act. But he couldn’t find any organizations focused on mobilizing the snowsports community on climate—there was a gap between the impacts that climate change was already having on our mountains, and any organized action being taken to address it. And so Jeremy founded Protect Our Winters.

Soon afterwards, we brought on other concerned pro athletes, individuals, resorts and winter sports companies. Since then, Protect Our Winters has grown from a kernel of an idea into a worldwide network of over 130,000 supporters – a social movement on climate, designed to activate a passionate community and create the political will for meaningful action by state and federal policymakers.

And, while POW’s earliest supporters were renowned athletes and respected corporations, the movement quickly grew to include the wider outdoor sports community  as their playgrounds and livelihoods also depend on healthy winters.

This was the perfect group to give a national voice to outdoor sports, an industry that supports 7.6 million+ jobs and creates $887 billion in economic revenue. While the fossil fuel lobby may outspend environmentalists 20-1 in Washington, we share a passion that crosses party lines, a unique perspective that de-politicizes any climate discussion, and an industry with an economic impact that can’t be ignored.

Our key formula for engaging 60 million+ outdoor sports enthusiasts globally: relevance and authenticity. Though we can dress up for meetings, in the end we are pro athletes, dirtbags and diehards; for us, winter is not just a passion, but a way of life.

Right now, we have the luxury of worrying about how climate change might impact the outdoor industry. Right now, we get to help dictate the outcome rather than react to a foregone conclusion. If we sit on our hands for the next two decades, we won’t be worried about powder days, tourism or having fun. We’ll be worried about the stability of our environment, our jobs and our economy.

We All Need Winter. 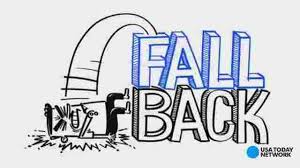 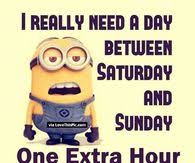 I hope this message finds you all well and getting ready for the weekend.

I thought I would share with you the below book I have been reading that of which I have found rather interesting.  The title of it is “Angel Words, Visual Evidence of How Words Can Be Angels in Your Life, by Doreen Virtue and Grant Virtue.” 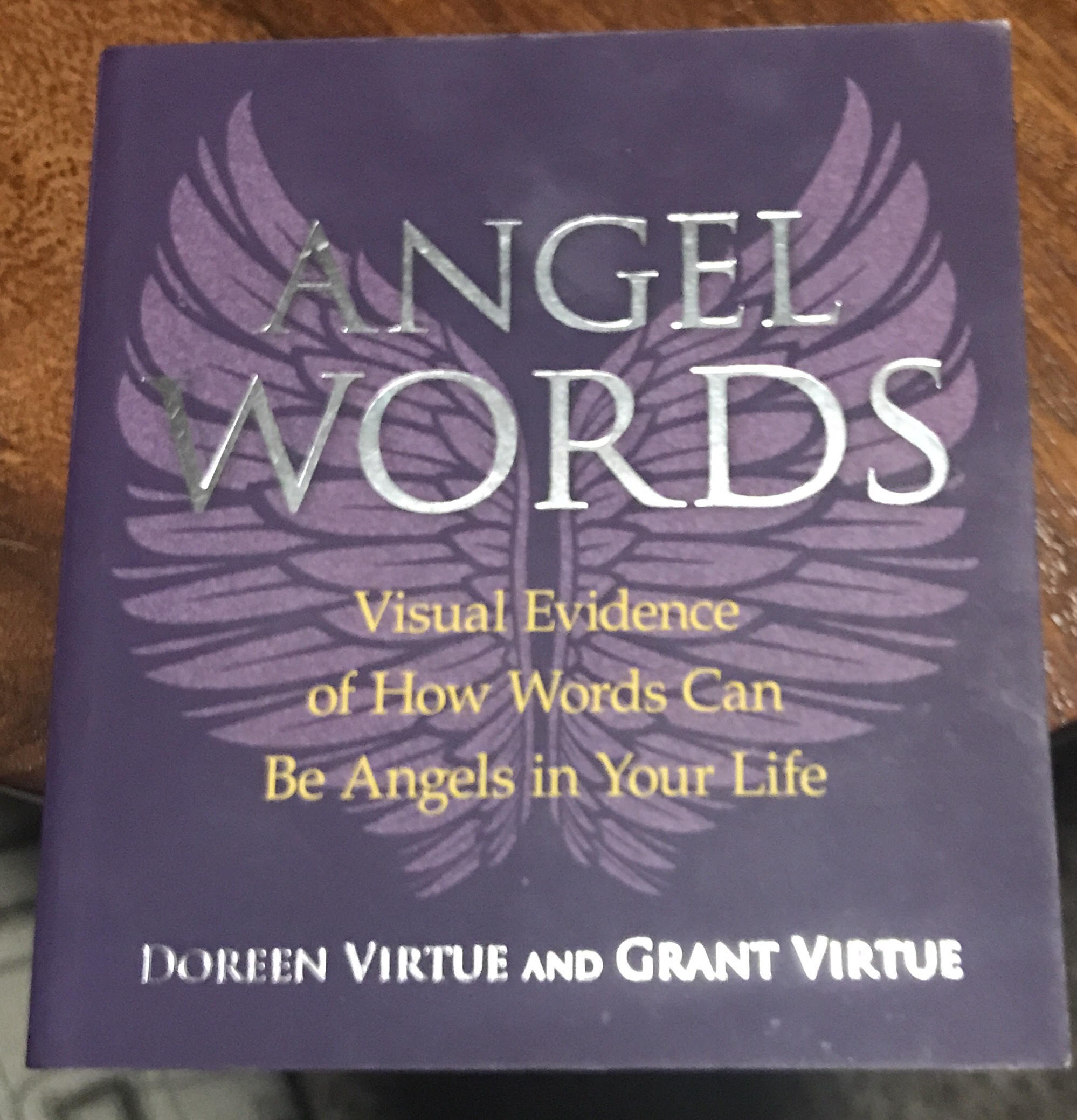 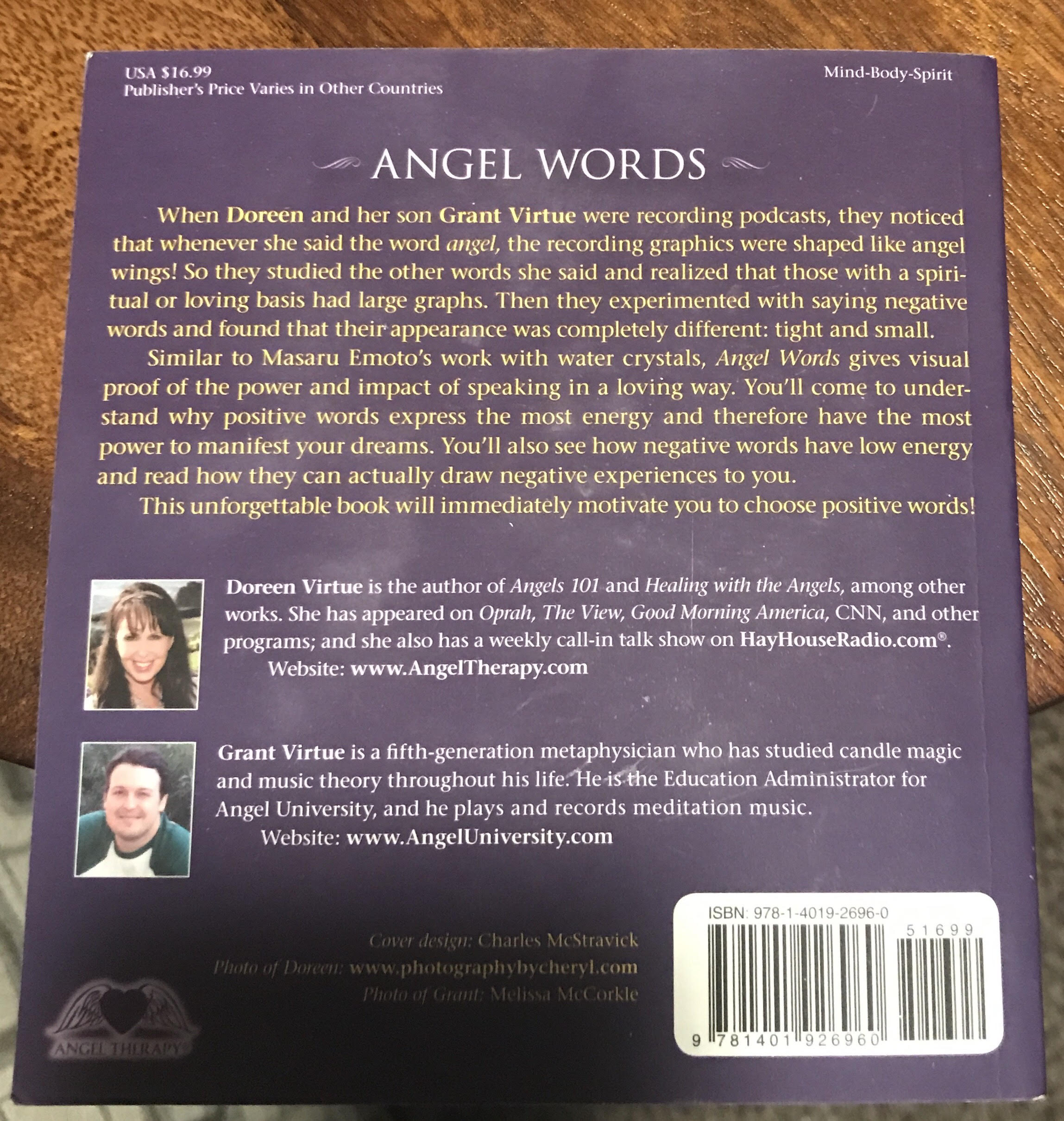 As you know and can feel when spoken words have an effect on those speaking them and those receiving the message spoken.  Take a look at the Love and how it is reflected in the many emotions of which it is said. Here are a couple more examples: 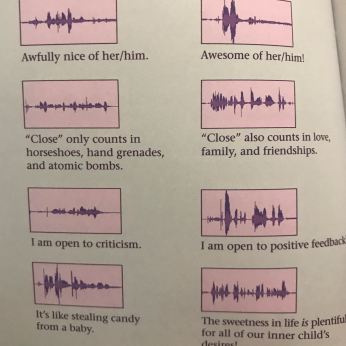 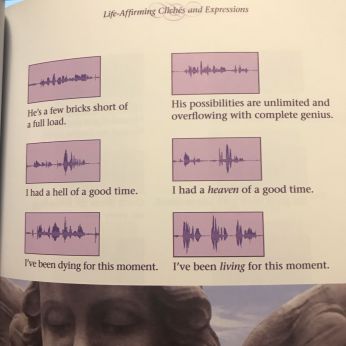 It’s rather quite interesting and makes one stop and truly think before you speak.

Angels, you have a chance you should check out this book by Doreen Virtue and her son Grant Virtue.  They have put a lot of work into a book to make one stop and think about being more positive in life and about the words one thinks of and says.

I hope you all have a fabulous day and weekend!

Good day Angels!  I read this poem this morning and had to share.  Enjoy as I have…

Have a fabulous day Angels!

I was wondering as I came across this amazing creature if any of you have ever heard of the Cyrtopleura Costata?  Well, if you have not heard of it – here is a bit of information on this Angelic creature…

“Cyrtopleura Costata is a bivalve mollusc in the family Pholadidae. It is found in shallow parts of the northwest Atlantic, living in the seabed, where it burrows through sand and mud to a depth of up to 3 feet (0.91 m)

Cyrtopleura costata has a pair of brittle, asymmetric white valves and can grow to about 7 inches (180 mm) in length. The anterior end is elongated and has a rounded point which is used for digging through the substrate. The posterior end is truncated and rounded and near the beak has an apophysis, a wing-like flange, which helps provide an attachment for the foot muscles. On the anterior side of the beak, the margin is smooth and bent slightly upwards. The whole valve has finely sculptured radial ribs which intercept with a series of concentric growth rings parallel with the margin. In the living animal, the valves are covered by the periostracum, a thin grey protective layer of protein which is part of the shell. This layer has usually been stripped away by sand and surf by the time that the empty shells are washed up on the beach, and the valves are usually found singly, because the muscles that hold them together are weak. Internally, the live mollusc has a powerful muscular foot and a pair of long, fused siphons. These siphons are unable to retract back into the shell and as a result, the two valves permanently gape apart. 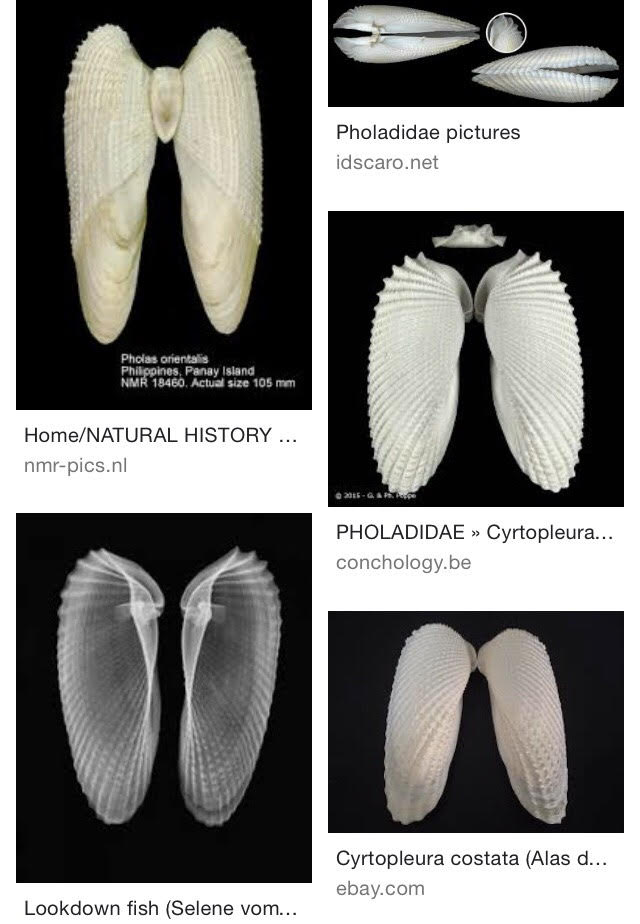 Cyrtopleura costata lives beneath the surface of the sea bed. It is able to bore through sand, mud, wood, clay and even soft rock using a twisting motion of its pointed, anterior end assisted by jets of water ejected from the mantle cavity. It is a filter feeder. The siphons extend to the surface of the substrate and water is drawn in through one and expelled through the other with microalgae and zooplankton being filtered out as the water passes through the gills. Respiration takes place at the same time. Cilia then waft the food particles to the mouth.

Spawning usually takes place in summer. Gametes are passed out of the exhalent siphon and fertilisation takes place externally. After hatching, eggs develop into veliger larvae which are planktonic. After 16 to 21 days these undergo metamorphosis into a pediveliger stage and settle out onto a soft substrate such as sand. There they become juveniles and start burrowing.”

Is this not the most beautiful thing you’ve ever seen?  There are always sign near and far and always around us.  Be open, have no doubt, have no fears, stay positive, and be around only positive individuals as negativity only bring us and our energy down.

Stay Blessed Angels and know you are always Loved!

Always with Light and Love!

My Angels, I share this interesting email with you on behalf of Guru Singh & Guruperkarma Kaur ~ being nervous in any situation is natural and only human.  It’s what makes life… real and, has you in the moment/present.  Having nerves and being nervous is exciting, frustrating, and yet necessary all at the same time.

Have you ever worked at a job where you would just love to move on and do something else, but you enjoy some of the people where you are, you feel you haven’t quite made a big difference yet (when you truly have already), and/or you have been there for so long that the idea of a change and leaving the familiarity of this place and the contacts you’ve made is a bit stressful to even ponder.  When someone thinks of something they need or need to have done they always know that you can do it and will.  They depend on you and know your reputation to be the one to go to.  That in and of itself is priceless.  That right there shows that you have, in fact, made a difference.  But, you have not been treated properly for a long time now, have not been supported in your efforts to grow, and you come home everyday irritable/upset/depressed and just not as happy as you used to be when going to do this job.  Sometimes, there are just signs that tell you deep down “it is time to move on” as Change is Required.

My Angels, life is too short not to be “happy.”  No matter what that happiness is for each and every one of us, we must all find our happiness daily.  And, if you are working at a particular place that does not in some way, shape, or form give you some sort of happiness or fulfillment then please listen to your inner voice and the signs that are giving you the guidance you require – the guidance you need.

My Angels, I say all this to tell you to please have “FAITH!”  Have Faith in the future, in your Angelic Inner Guidance, in yourself, Faith in this Life.  My Angels, you are always looked after and loved tremendously.  Believe in this, believe in you, believe in Faith, believe in your loved ones who are cheering you on and know you can do anything you set your mind to.

Now, Go and Spread Your Wings and Fly My Angels!  Fly so High and Never Look in that Rear-view Mirror except to wink and say “I Did It!”